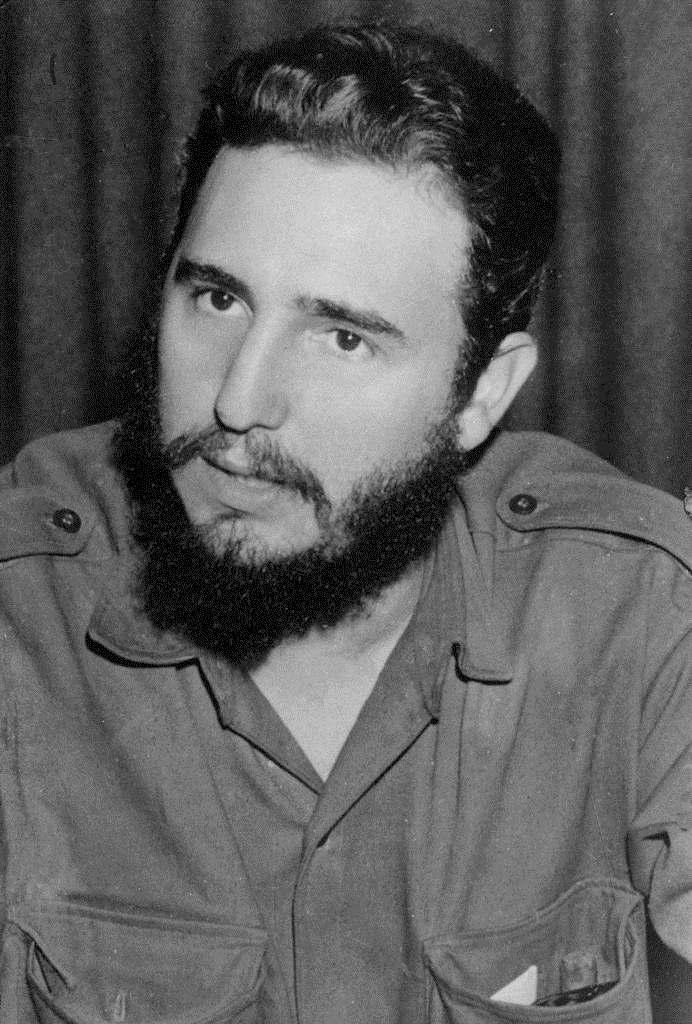 Fidel Alejandro Castro Ruz (; ; 13 August 1926 – 25 November 2016) was a Cuban revolutionary and politician who was the leader of Cuba from 1959 to 2008, serving as the prime minister of Cuba from 1959 to 1976 and president from 1976 to 2008. Ideologically a Marxist–Leninist and Cuban nationalist, he also served as the first secretary of the Communist Party of Cuba from 1961 until 2011. Under his administration, Cuba became a one-party communist state; industry and business were nationalized, and state socialist reforms were implemented throughout society.

Born in Birán, the son of a wealthy Spanish farmer, Castro adopted leftist and anti-imperialist ideas while studying law at the University of Havana. After participating in rebellions against right-wing governments in the Dominican Republic and Colombia, he planned the overthrow of Cuban President Fulgencio Batista, launching a failed attack on the Moncada Barracks in 1953. After a year's imprisonment, Castro traveled to Mexico where he formed a revolutionary group, the 26th of July Movement, with his brother Raúl Castro and Ernesto "Che" Guevara. Returning to Cuba, Castro took a key role in the Cuban Revolution by leading the Movement in a guerrilla war against Batista's forces from the Sierra Maestra. After Batista's overthrow in 1959, Castro assumed military and political power as Cuba's prime minister. The United States came to oppose Castro's government and unsuccessfully attempted to remove him by assassination, economic embargo, and counter-revolution, including the Bay of Pigs Invasion of 1961. Countering these threats, Castro aligned with the Soviet Union and allowed the Soviets to place nuclear weapons in Cuba, resulting in the Cuban Missile Crisis – a defining incident of the Cold War – in 1962.

Adopting a Marxist–Leninist model of development, Castro converted Cuba into a one-party, socialist state under Communist Party rule, the first in the Western Hemisphere. Policies introducing central economic planning and expanding healthcare and education were accompanied by state control of the press and the suppression of internal dissent. Abroad, Castro supported anti-imperialist revolutionary groups, backing the establishment of Marxist governments in Chile, Nicaragua, and Grenada, as well as sending troops to aid allies in the Yom Kippur, Ogaden, and Angolan Civil War. These actions, coupled with Castro's leadership of the Non-Aligned Movement from 1979 to 1983 and Cuba's medical internationalism, increased Cuba's profile on the world stage. Following the Dissolution of the Soviet Union in 1991, Castro led Cuba through the economic downturn of the "Special Period", embracing environmentalist and anti-globalization ideas. In the 2000s, Castro forged alliances in the Latin American "pink tide" – namely with Hugo Chávez's Venezuela – and formed the Bolivarian Alliance for the Americas. In 2006, Castro transferred his responsibilities to Vice President Raúl Castro, who was elected to the presidency by the National Assembly in 2008.

The longest-serving non-royal head of state in the 20th and 21st centuries, Castro polarized opinion throughout the world. His supporters view him as a champion of socialism and anti-imperialism whose revolutionary government advanced economic and social justice while securing Cuba's independence from U.S. hegemony. Critics call him a dictator whose administration oversaw human rights abuses, the exodus of many Cubans, and the impoverishment of the country's economy. Provided by Wikipedia
1

Statement at the solemn tribute in Havana
By Castro, Fidel
Published in New revolutionaries : left opposition
artikel
Add to Favorites

Our party reflects our country's recent history : report by Fidel Castro, closing the ceremony of presentation of the Central Commitee of the Communist Party of Cuba, Havana, 3rd....
D/82/008/DOC By Castro, Fidel
Date 1965
monografie
Add to Favorites

Division in the face of the enemy was never a revolutionary or intelligent strategy
Toespraak aan de Universiteit van Havana, 13 maart 1965 ; D/82/008/DOC By Castro, Fidel
Date 1965
monografie
Add to Favorites

Those who are not revolutionary fighters cannot be called communists
Toespraak, gehouden op 13 maart 1967 ; By Castro, Fidel
Date 1968
monografie
Add to Favorites

History will absolve me
By Castro, Fidel
Date 1967
brochure
Add to Favorites