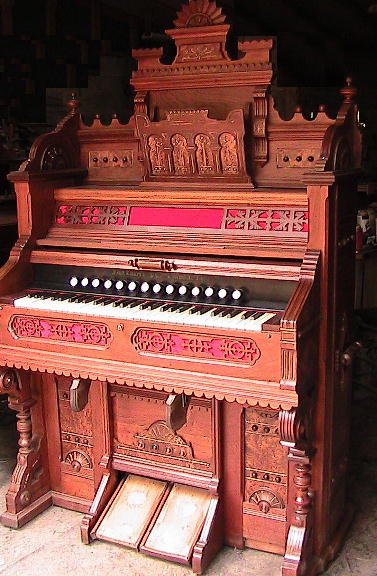 The pump organ is a type of free-reed organ that generates sound as air flows past a vibrating piece of thin metal in a frame. The piece of metal is called a reed. Specific types of pump organ include the reed organ, harmonium, and melodeon. The idea for the free reed was imported from China through Russia after 1750, and the first Western free-reed instrument was made in 1780 in Denmark.

More portable than pipe organs, free-reed organs were widely used in smaller churches and in private homes in the 19th century, but their volume and tonal range were limited. They generally had one or sometimes two manuals, with pedal-boards being rare. The finer pump organs had a wider range of tones, and the cabinets of those intended for churches and affluent homes were often excellent pieces of furniture. Several million free-reed organs and melodeons were made in the US and Canada between the 1850s and the 1920s, some which were exported. During this time Estey Organ and Mason & Hamlin were popular manufacturers.

Alongside the furniture-sized instruments of the west, smaller designs exist. The portable, hand-pumped harmonium or samvadini is a major instrument on the Indian Subcontinent developed by Indians to meet local needs. The craftsmen created a harmonium that a single person could carry, with added microtones. Provided by Wikipedia
1